We’d like to introduce Adrian Wood, head chef at the award-winning AA rosette Brossen Steakhouse at the Inn on the Square to our followers. Adrian joined the steakhouse from his role as sous chef at Lyzzick Hall outside Keswick. Originally from a background of chefs, Adrian followed in the family footsteps, which led him down a path of catering hospitality; from hotels, contract catering, to teaching in colleges, all of which has had a huge influence on his cooking style.

Adrian has worked in the Lake District for the last 16 years, but is originally from Yorkshire; he’s passionate about using local produce and thrives off the variety that the area has to offer. With an abundance of woodlands and coastal areas, game and fish are easily available, he says, “It’s a chef’s dream come true”. Since starting work at the Inn on the Square, Adrian has introduced his own style of cooking, by using old methods with new modern skills, setting flavours into gels by introducing gastronomy techniques and micro herbs.

Adrian commented, “I’ve adapted the menu to suit my own cooking style, the key is to not over complicate things, keep it simple and use good quality produce that’s in season to get the best taste and flavour. Although steak is our core feature, I love fish and there are more options for that on the menu now. We’ve improved our sharing steaks by adding the chateaubriand and the supersize T-bone at 40oz and the feedback has already shown we’re making the right changes”. 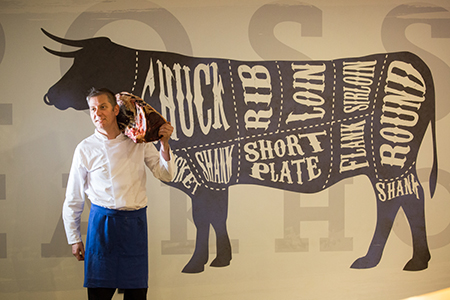 The artistic flair of Adrian has helped Brossen Steakhouse retain their AA Rosette status for a second year running, following on from a recent AA inspection. The accolade from the AA reflects the consistent high standards that Wood and his team aim for.

Aside from heading up Brossen Steakhouse, Wood is looking to improve menus for functions including the party nights being held this December, and reinvent the food offering in the Back Bar behind the Inn on the Square.

Wood is also tasked with implementing new menu ideas in Brossen Steakhouse, so with local in mind, he plans to launch a new Cumbrian menu on the 5th September, which features Morecambe Bay shrimp, Venison from Cartmel, Herdwick lamb, Bedrock gin cured char, Lakeland pork belly, Solway skate, Whitehaven rum, local apples and a Cumbrian cheese board to name but a few. The menu also aims to give something back to the regulars; by becoming a ‘Brossen Lunch Club’ member diners can receive tasty treats, with a complimentary glass of wine on the 4th visit, a complimentary starter or dessert on the 7th visit & a complimentary 2 course meal on the 10th visit.

Get our latest offers